History of Sweden in Europe and the WorldSemester Course

This course focuses on Sweden’s historical relationships to the Baltic region, Europe, and the U.S. We look at the Great Power Era, the poverty and mass emigration of the 19th century, the inter-war Middle Way, World War II, and, finally, the post-war era. With emphasis on post-1989 Sweden and Europe, we examine Sweden’s international profile and power, which influences Sweden’s national identity and future.

This course would also be of interest to the following discipline(s):
International Relations

Phil. Mag. in Nordic Archaeology PhD in Archaeology from the Australian National University, College of Asia and the Pacific. Research focused on the very first colonisation of Remote Oceania (the Mariana Islands in particular) by tracing migration from Island Southeast Asia through pottery. Olaf has been teaching history for many years in compulsory school and is currently writer and editor in history at the digital educational tool Binogi. 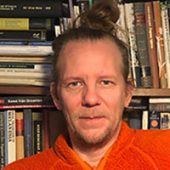