One psychology course at university level.

This course would also be of interest to the following discipline(s):
Philosophy, Public Health

M.Sc. (Health Psychology, City, University of London, U.K., 2000). BSc. Hons. (Psychology, City, University of London, U.K., 1997). Certified in psychotherapy and counseling and in the process of qualifying as a psychoanalyst from the Centre for Freudian Analysis and Research. Co-authored a number of journal articles on post-traumatic stress disorder. Previously, was the Clinical Director of Community Housing and Therapy, a leading UK charity running therapeutic community households for adults with mental health diagnoses. Managed two therapeutic community projects - a project working with homeless veterans suffering from mental health difficulties and a project for individuals with a diagnosis of psychosis and personality disorder. Worked as a psychologist in the Greek Army. With DIS since 2015. 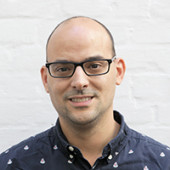